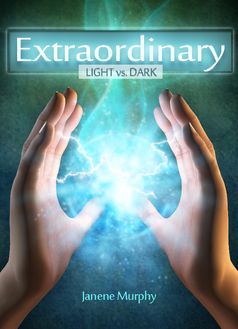 (P.S. all rights reserved, etc., etc. Don't copy this without permission, got it?)
Darryn was born with a head full of hair, black as the bottom of a well. His nose? Not the cute button seen on newborns but a long one with an upturn at the end. As for his chin, it was already angular with a cleft poised to deepen later. None of his features resembled that of a baby. Darryn had the look of a man.
Most striking of his features were his emerald eyes. Large and deep, they had a penetrating gaze. The doctor said his eyes could pierce a person’s soul.
That gave his parents the first clue.
In the hospital, soon after Darryn’s birth, the nurse presented him to his parents. Nestling the blanketed bundle in her arms, his mom brushed a soft finger over his cheek. Darryn responded by opening his eyes. He gave her a long, meaningful stare.
“We’ve been chosen,” she said.
“He’s been chosen,” his father replied.
They knew the infant’s purpose. Darryn knew it, too. For the next sixteen years he studied, trained…calculated.
This story, however, isn’t about Darryn. Not yet. It’s about Alina. She was born a few minutes before Darryn in a town not too close, but not too far, away. Her eyes were not green but brown, like the bark of a tree. They seemed to hold no magic. In fact, nothing about Alina seemed special at all, inside as well as out. She was just a baby, with simple baby thoughts. She knew nothing of Darryn or his purpose. In fact, she knew nothing for a very long time.
And that, unfortunately, put Alina at a dangerous disadvantage.

(I can already tell I'm going to love this. Take me back to the page with ordering information.)